Borf Exhibition is a Bore 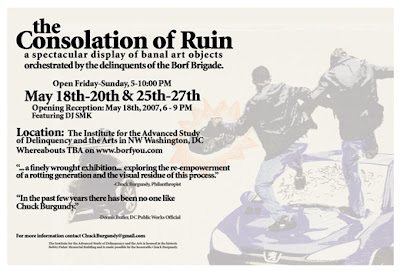 This past Friday, a resident informed the community via the Eckington listserv that she had found a postcard, similar to the one pictured above, lying on the ground. The po 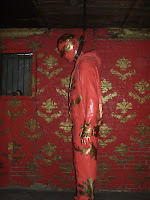 stcard announced that an art exhibition (titled The Consolation of Ruin) would take place over the weekend to celebrate the legacy of "Borf," the work of a juvenile delinquent named John Tsombikos from Great Falls, Virginia, whose artistic graffiti vandalized at least 100 D.C. locations until he was apprehended in 2005. (Washington Post story here.) A visit to the website listed on the postcard revealed that the exhibition would be located in our neighborhood.

Some residents responded to this information that they were "happy there's to be more art in the neighborhood too, as well as more creative youth culture. " Others countered to the tune of "Defacing people’s property isn’t art." I decided to visit the opening night this past Friday myself.

I've posted some pictures of the exhibit on this space (click on photos for a larger view). More than half the exhibit is 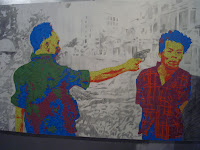 not graffiti, but hangings, executions, smashed furniture, and a Borf shrine. It is all rather nihilistic and depressing.

I don't believe that the exhibition attenders (approximately 95% of whom were white incidentally, at an exhibit located in a 95% black neighborhood), were there to feel compassion for the residents of D.C., who wake up every morning to the graffiti that has raine 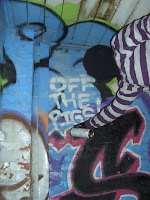 d down upon their neighborhoods. (More on the current graffiti situation here.)

My conclusion: It's protected free speech, one can argue that it's pretty good art, but it was not a class act to hold the exhibition in our neighborhood. We already have occasional moments of anarchy in our neighborhood, we don't need anarchist art. We need art that uplifts the spirit. For example, why not create art reflecting moments when people of all races and economic backgrounds work together to improve our communities? "Borf" (and his imitators such as "Magic") is about the graffiti artist himself. It's egocentric and it's boring.

The exhibition is l 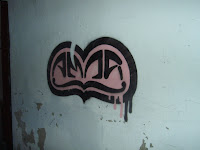 ocated at 1644 North Capitol Street N.W., right next to Savemore supermarket. A resident pointed out to me tonight after the Eckington Civic Association meeting that the Savemore has new graffiti that appeared after the exhibition opened (pictured here to the left). It is ironic; perhaps a local tag artist drew inspiration from the exhibition. I spoke with the owner tonight and he confirmed that the graffiti is new. One resident tonight has a message for all Virginia graffiti artists: "Why don't you go tag McLean?"

For additional photos of the exhibit, this blog has some high quality pics.
Posted by Kris Hammond at 2:15 AM

i hope i'm not too forward in offering my thoughts buti was a bit troubled by your post.

1. the borf tags, graph, and art was done by a team of people.
2. i noticed lots of neighborhood and nearby neighborhood kids.
3.Considering art, criminal activity or graffiti "pointless" is pretty off mark. I'm a law abidding, university trained, professional artist that only exhibits in legit venues and i get "it". i dont agree, but i get it. Graffiti is a problem and to write its content off as pointless is absurd. Besides, I found the exhibit rich with metaphor and i was quite suprised to read that you didn't.

4. I'm troubled by your statement that the event attendees werent there to "feel compassion for the residents of DC". Granted, i was extremely puzzled as to why it happened there,but is that a requirement for events in our community? Do all of our business feel compassion for us? Does the KFC?

5. you mention the racial make up of the attendess. while i noticed far more non-white faces than you did, what of it? would you feel differently if it was black youth? what if they were asian? Are people that we consider outsiders not welcome to stage events in our community?

Again, i am 100% against the vandalism of property, but this event, minus the one illegal tag, was by and large a positive addition to our community.

i saw people peacefully and soberly congregating on our sidewalks. i saw people dancing and talking. i saw art in an otherwise empty building.
i saw drivers-by shocked that something was going on. I saw lots of underage people in a club like setting and not one person got shot. there were no fights.

All of this was a positive direction for creative and sometimes destructive energies.

i have posted pictures on the bloomingdale flickr group. please feel free to add more if you have some:
http://www.flickr.com/groups/bloomingdale/

Thank you for your respectful comments, which are very helpful.

I have to agree with you, the exhibit was not pointless. I actually appreciate this art. I viewed the exhibit with mixed emotions and realize the talent.

But the impression I also got is that the exhibitors do not care about this neighborhood: They didn't tell any neighbors or me that they planned to hold the event, the location was kept secret until the last minute.

The property owner who permitted this event on his property does not respect the neighborhood because his property has been vacant for too long, and that is bad for the community as well.

There were definitely some positive aspects to the event. My intent is to demonstrate that we should not uncritically accept every intrusion into the neighborhood. As far as negative impacts go, this exhibition is well down the list, below the liquor stores and other entities.

On behalf of the Brigade, I'd like to apologize for the gross oversight of not inviting the neigborhood to the opening. It was our original intent to pass out cards in peoples mailboxes (more likely tuck them into doors, I think technically we can't stuff mailboxes?) and somehow that task got lost in the shuffle of pulling the construction together. We are planning on passing them out around the neighborhood later this week, before the street party (whose location has yet to be decided).
Also, that stencil that popped up on the grocery happened approx. a week before the opening (and is unrelated to the brigade), I can't say with any certainty if it appeared before or after the location of the show was disclosed.

PS- The location was kept secret to avoid newscasters who would try to cover the show prematurely, any of the people that hang out right there knew what it was and what was going on inside. (including the guys at the grocery)

Neighbors sincerely appreciate your willingness to open a line of communication. I will send an e-mail to the e-mail address listed on your website. I hope that we can begin the process of working together for our mutual benefit.

yeah. i hear that.
i really thought that your post would generate more comments....

Kris... what everyone here has failed to realize is the fact that "Borf" is so much more than a name.

The artist calls himself that to honor his best friend who killed himself, named BObby Robert Fisher; BO.R.F. This is one of the reasons his art is very graphic, to show the unsettling life that Bobby led, and how society abandoned him.

Now before everyone who reads this goes spouting off about knowing this stuff, I just wanna say that Bobby Fisher grew up 3 houses down the road from me, and was one of my first friends when I moved to Virginia. And I've known John Tsombikos for a while as well.

And to the resident that said we should go tag Mclean: We do! but the whole point of graffiti, muchless art as a whole, is to be seen! why hit up some place where maybe 100 people will see it when we can tag a place that will be seen by 1000s of people everyday?

Graffiti isn't widely accepted enough to be hung in a museum. And until then, we will throw up our art where ever we can. And even then, more people get to our art on the streets. To quote on of Britain's best graf artists, Bansky: "To go through the process of having your art selected must be very boring. It's much more fun to just go put it up!". This was said after an occurance when Bansky hung up his own art in the Louvre in Paris.A lot of our work appeals mainly to people qwho wouldn't be looking in a museum. Our art can make you laugh, but let you know that something is also very wrong with our society.