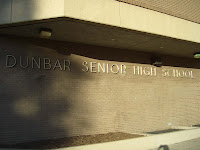 Yesterday's Washington Post article about Dunbar High School, "Rose-Colored Views of an All-Black School," caught my eye not because of its focus on (the lack of) racial integration, but rather for its passing revelation of Dunbar's achievement numbers.

At Dunbar High, according to the article, "[j]ust 29 percent scored as proficient or better in reading; in math, the figure was 27 percent." According to this site, Dunbar's ACT scores averaged 14.2 in 2005. That score does not compare favorably with the average nationwide score of 20 (on a scale of 36) (source here).

Meanwhile, at least two weeks ago, I called Dunbar High School and no one answered, so I left a message. I stated my name, and reminded the listener that I was an ANC commissioner and that the Dunbar was located within my district. I requested a call back on the question of whether Dunbar had a chess club. If not, I was interested in starting one, I said.

I received no call back, which was unfortunately not surprising. Dunbar seems to operate within its own orbit, the community in another. Meanwhile, I am wondering how I even have time to launch a chess club. It's merely an idea that I hope will be given a try, the rationale being that not everyone can (or desires to) be a football star. I believe that young people tend to experience improved overall health (and higher grades) when they participate in organized after-school activities.

No doubt Dunbar has may extracurricular activities, but there is no school website, so it's all speculation about whether there is an unserved niche. I wonder how can a parent make an informed decision between Dunbar and a charter school, when there is no website informing parents of Dunbar's well-regarded pre-engineering program. I suppose it all begins with returning phone calls.
Posted by Kris Hammond at 6:45 PM

Dunbar exactly does has a chess club. I do agee that Dunbar needs community support, but that's not the root of Dunbar's problems. The growing problem in the majority of DCPS schools is children that have no ambition to learn, and I graduated last year so I know this first hand.