Recap of the Past Week

This is my first entry in 12 days, but whenever there is a lag in posts (12 days is long time in the blogging world) know that I am stilling going to the meetings and trying to advance our neighborhood's objectives. 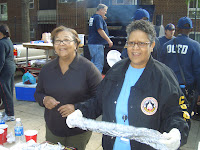 This past week was busy. Last Saturday, I attended the Octoberfest at Florida Avenue Park (1st and Florida N.W.) at the behest of Alice Thompson, Ward 5 Outreach & Services Specialist. Many police officers and other ANC 5C commissioners attended... and Chair Anita Bonds volunteered to help serve food.

On Monday, I attended the D.C. police PSA 501 meeting, held in conjunction with the Bloomingdale Civic Association meeting.
On Tuesday, the ANC 5C meeting at St. George's church lasted more than three hours. That meeting presented some difficulties and highlighted areas where ANC 5C can improve... a subject to tackle in a separate entry. 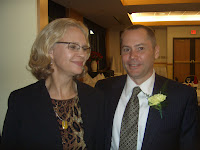 On Thursday, I attended the 2007 Fifth District Citizens' Advisory Council Awards Dinner at the The Washington Navy Yard, which recognized police officers and citizens who have served our community with distinction. Some notable honorees who have served Eckington/Truxton Circle include Officer Brian Glover as PSA Officer of the Year, Supervisor of the Year Sgt. Charles Woodard, special award receipients (outgoing) Commander Jennifer Greene and Commander Melvin Scott. James Berry received the Frank E. Braxton, Sr. Award.
Then on Friday, I joined residents at North Capitol Main Street's Fall Wine Tasting at Bloomingdale Liquors (1st and Rhode Island Avenue NW). Folks who know me know that I had all sorts of thoughts for future wine tastings. (Photos posted when I receive them from Pat Mitchell.)
Finally, on Saturday three community leaders joined me in meeting with Melissa of the Borf Brigade at Big Bear Cafe. More to report on that soon.
Posted by Kris Hammond at 10:19 PM

thanks for your hard work, kris.

it's much appreciated. i hope we can work with people like melissa to help make our neighborhood a destination for emerging artists. the 52 O St Studios and the gallary at 87 Florida Avenue are great parts of the Eckington/Truxton/ Bloomingdale.

maybe there's some netowrking possibilities with the DC Commission on the arts and humanities? or some conversations to be had the the noma planners about creating an arts district here, like the gateway project in hyatssville, with some low-cost housing in condo projects earmarked for artists, as well as for firemen, teachers, cops, etc?