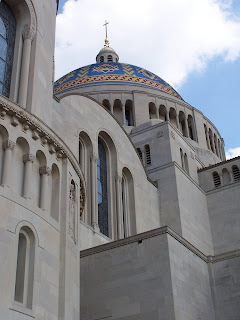 (Photo of the Basilica at Catholic University by Dan Malouff.)

I attended the Ward Five Economic Development Summit earlier today. It was hosted by Councilman Harry Thomas, Jr. and held at Catholic University . Stop Blog and Roll has the agenda posted here.

I was particularly interested in the panel titled "Stimulating Neighborhood Economic Development." (SNED) It was a lot more important, I think, than the "Mini Workshop on Negotiating Community Benefits Packages." Both were billed at one hour each, but the SNED panel started a half an hour late.

The SNED panel spoke for a half an hour, then came time for questions from the audience. The second question was the last, or rather it became the second-to-last after a small protest from the third questioner. Moderator Deborah Crain demonstrated an uncanny ability to get the schedule on track: just end the session. We should hire her for ANC meetings (we are always running over).

I was interested to hear from panelist Ana Harvey, Greater Washington Hispanic Chamber of Commerce, that her organization has been working with Verizon to provide DSL services to small businesses. Noting that the lease is often a business owner's most onerous cost of doing business, Harvey said that the Hispanic Chamber has also been helping businesses renegotiate their leases.

If I had had an opportunity to ask a question of the SNED panel, it would have related to the severe economic downturn that appears to be coming our way (or is here already). As I discussed with a member of the community this past week, one home sale in Bloomingdale had been listed for $524,000, but it sold for only $399,000. As noted in a news article this week, "The [Federal Reserve] stoked anxieties over US prospects with a prediction that America is set to be blighted this year by a combination of anaemic growth, higher inflation and rising unemployment." So what's the economic plan for Ward Five to combat this challenge?
Posted by Kris Hammond at 5:01 PM