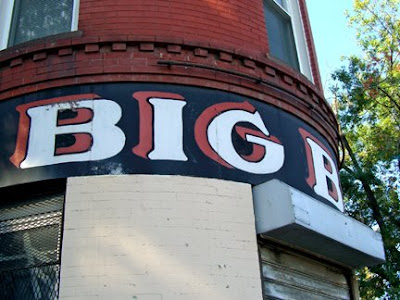 On the day of my meeting held for constituents this past Sunday at Colonel Brooks' Tavern, controversy surrounded Big Ben liquor store, located at the corner of North Capitol Street N.W. and New York Avenue. A gentleman who bought a house in 2006 right next to the liquor store and then joined in protesting the establishment's license within months of that purchase was again castigating the business on the Truxton Circle website.

I received an e-mail from Bloomingdale resident Sara Kaufman:

A potential thought for the Big Ben [liquor store] discussion... beautification of an area helps replace some of the ugly (crime and grime). And the care of an area can help the "locals" take responsibility for that area.

I had asked North Capitol Main Street (NCMS) about ordering another of (what used to be) our signature colorful pots with more roses for in front of the store . . .

As I'm sure you've already heard me report: when NCMS put the pots at the "Bus Stop Park" at Florida and North Cap three years ago - it helped some with some of the problems there.. And its a good way to interact with the "locals." . . . My line is "I'm just a volunteer and I'm always looking for other volunteers to help me" when hey ask to help or for money. I always get someone to help and they are happy to do so, and pick up on days/weeks/months that I'm not there. Now they stop to talk to me when I see them . . .

NCMS talked some with Mr. Singh at Big Ben on a NMCS walk about last year. He was very receptive to care of something like that around his store. . . . Maybe the ANC would provide funds for pots and flowers?

The meeting was sparsely attended, but Mr. Singh was there, the second time he has attended one of my meetings. Showing up counts for a lot in my book. Well, Mr. Singh was more than willing to maintain flower pots, he volunteered to provide the funds to purchase the beautification.

He was also interested when I told him that North Capitol Main Street has a design committee that could help him with developing a more attractive interior. We discussed the possibility of adapting his business model to the changing neighborhood. He mentioned that he has made contributions to local community efforts. And we heard about some of the obstacles he faced, such as the time his store was robbed at gun point and he lost $10,000.

People often assume the worst about a business (particularly liquor stores) without engaging the business owner and giving him or her a good-faith opportunity to make a positive contribution to the community. I'm seeking to change that inclination.

(Photo credit: http://pedestriantype.blogspot.com)
Posted by Kris Hammond at 12:16 AM

This is such great news. Congrats to you and the NCRC team for engaging the owner in a conversation about helping improve his storefront. Really this is great news. Thanks for sharing and for your hard and appreciated work.