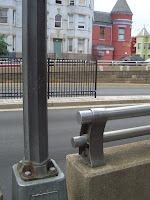 As many neighbors are aware, on July 15, Quincy Lewis Gatling was struck and killed by a vehicle on the 1800 block of North Capitol Street after climbing over the railing to cross the street. Pedestrians may use crosswalks one block north or south of this location, but S Street and Seaton Place are not intended to be passable.

Yesterday, I saw a man preparing to walk between the railing and around the wrought iron fence in the median along North Capitol Street just feet away from where Gatling was killed (click on photo for larger view). I called out for him to wait, and ran up to him. "Are you aware that two weeks ago, a man was killed doing just what you are about to do?" I asked him. "Yes, I know," he replied. He then vaulted over the railing and proceeded across the street.

As is too often the case, it takes a death in order for everyone to focus on safety issues, but as this incident yesterday indicates, some people won't necessarily change their routines.

I think that installation of the iron fence was an excellent idea from the D.C. Department of Transportation, for both safety and appearance reasons. The fence must be extended two blocks further north, because then it will be too inconvenient for neighborhood daredevils to cross.
Posted by Kris Hammond at 9:04 PM

This is a metaphor for the neighborhood, isn't it? It symbolizes the breadth and depth of ignorance that grips the area. It represents someone "new" (Kris) attempting to make things right, and someone "old" (the daredevil) stubbornly resisting change at his own peril.

There are some pedestrians doing very dangerous things on North Capitol.

Last week I saw a man in a motorized wheelchair traveling north on North Capitol against the traffic. It was rush hour and cars were swerving to avoid him and as he approached a point that he could get on the sidewalk he continued traveling in the wrong direction in the middle of the lane.

A police car pulled up at the lights and DID NOTHING to prevent an accident. Even when I drew the officer's attention to it, his reply was, "yeah, they do that sometimes".

I think we should push for some pedestrian bridges along the underpass! I'm looking to buy possibly on V St NE- and it would be nice to cross North Cap more easily to get over to Crispus Attucks Park. It would also help bring the neighborhood together!