Tonight is my final meeting as an Advisory Neighborhood Commissioner. Since this is the December meeting, it will be short and end with a community social event.

The following are some highlights:

This evening I attended the community informational meeting hosted by the St. Martin's Steering Committee and ANC Commissioner Mary Lois Farmer-Allen (5C06) at McKinley Technology High School. Construction will begin this month on the St. Martin's Apartments, which will provide 178 units of workforce and low-income housing at 116 T Street NE.

Approximately 25 people were in attendance at the beginning of the meeting. Father Michael Kelley of St. Martin's Catholic Church made some brief comments, thanked the community for its input, and asked for prayers for the safety of the construction workers. Commissioner Farmer-Allen made a few comments, then developer Neal Drobenare introduced some new people who will be involved with the construction.

Drobenare announced that there will be a 2-year construction period from ground-breaking to final completion of 178 units and 176 underground parking spaces.

The heaviest period of truck traffic will occur during the first 6-week period of the project; after that time, traffic will be greatly reduced. Construction will begin every day (5 days per week) at 7 a.m. The truck traffic will be split between those trucks driving north from the construction site towards Rhode Island Avenue and those trucks that will travel south along 2nd Street N.E., then down Eckington Place N.E. R Street residents have expressed numerous concerns about heavy traffic in the past, and with a question I confirmed that no trucks will be traveling down the 100 or unit blocks of R Street N.E.

For two months, one block of Todd Place will be designated a no-parking zone. With this notification, one resident posed some pointed questions about parking. This was surprising because I recognized this resident as being one of the strongest supporters of the project among those who lived close to the site prior to regulatory approval.

Another individual charged that it appeared as though the construction workers were being favored over the residents. A complicating factor over which St. Martin's had no control was the absence of a representative from the D.C. Department of Transportation who was supposed to be present. Drobenare pointed out that although some parking would be temporarily lost, other zones that are currently designated as "no parking" would be freed for use.

At one point, Drobenare said that the plan had been put together with the advice of all the area civic associations. At that moment, a woman stood up and walked briskly from the room, apparently angry. Other residents indicated either during the meeting or afterwards that Drobenare's manner was offensive. Personally, I don't think that Drobenare said anything out of line, but given that I am lawyer (as he is), perhaps I didn't sense what some residents did.

Because the DDOT representive was not available, many uncertainties remain. One thing for sure, however, is that Hyde School will need to find a replacement for the 40 off-street parking spots it will lose during construction.

Drobenare stressed that residents with concerns during construction should come to St. Martin's first before posting a comment on a listserv or the Advisory Neighborhood Commission. The main contact will be Michael Blaylock (superintendent@st-martins-apts.com) and the construction manager will be Jim Brown (301-423-6000). The relevant contact information will also be posted on-site.

One resident asked whether the project was sufficiently capitalized to endure the current economic chaos in the credit markets. Drobenare assured the audience that there would be no problems with funding the project.
Posted by Kris Hammond at 10:53 PM 4 comments:

I'd like to offer a rationale for some of my votes at last night's 3.5 hour ANC 5C meeting (it was an exceedingly long meeting, but constituent Ted McGinn was present the entire time). My colleagues didn't seem to understand and were amused that I was often the only "no" or "abstain" vote.

A quick aside: Terrance Judge of the Metropolitian Basketball League gave ANC 5C an appreciation plaque as a thank you for the Commission's grant that assisted the MBL with its basketball tournament. I don't ever recall an appreciative gesture to the ANC like that before, thanks Terrance.

The first Commission vote was on the Planned Unit Development (PUD) Request for St. Paul’s Housing Development. Commissioner Silas Grant urged that the Commission voted down approval for the project because he and several community members had concerns with the amenities package proposed by St. Paul's, in part because it was supposedly inadequate. I have a problem with the amenities package concept (also known as legal bribery or extortion in some circles).

Normally I would vote with deference to the Commissioner with a particular interest in a project, and likewise I would vote begrudingly in favor of an amenities package where the developer and residents agreed. Here they disagreed and the entitlement mentality reared its head.

The developer offered 25 affordable housing units in an environment in which we are facing a housing crisis with ever-dropping housing prices, and shelled out hundreds of thousands of dollars for various community projects and benefits. Detractors wanted millions.

The project construction will bring jobs earmarked for D.C. residents to our area. The people who move in will expand our tax base. We're fortunate that the developer is still moving forward with the project given the economic crisis currently gripping the country. Lehman Brothers went bankrupt this week.

I was the only Commissioner to vote against Silas's proposal.

Then Ted McGinn sought a vote on his WiFi Network Proposal (ANC single member district 5c03) and several commissioners thought it would be a conflict of interest to proceed at this time because Ted is running for my seat on the Commission. So the Commission voted to defer a vote until... Ted is actually a commissioner and might actually have a conflict of interest. All they did was deprive SMD 5C-02 of a vote on the project. I voted to abstain because I have endorsed Ted for the office.

And what is the project Ted is chairing? Its predominant purpose is to bring the internet to the poor and connect them to the wider community. Ted gains no economic benefit, only bragging rights. And he's not a commissioner... yet.

The evening didn't slow down. Next came an emergency vote request by KIPP Public Charter School concerning its proposal for Cook Elementary School. This matter has been around for a couple of months, but this item went on the agenda only days ago. I tried to get Paul Ruppert on the agenda out of fairness, because he has a competing proposal.

The presentation didn't go very well for KIPP, I think they had technical difficulties. Commissioners properly zoned in on the fact that the community had not had a chance to weigh in on the proposed use (I for one had little notice that ANC 5C would become involved in the matter). The Commission voted sensibly to defer a vote until residents have had a chance to hear the proposals of all. I found this to be the best possible resolution, because both of the leading proposals are high-quality and informed residents should make this judgment call.

At this time, I went over to talk to Alex of KIPP and Paul to let them know that I valued both of their projects, and that we should work out a time for presentations to residents. By the time I made my way back to my seat, another vote was already being taken on the PUD Extension for the 4th and Rhode Island NE Project. Having heard virtually none of the brief presentation, I voted to abstain and my colleagues were amused. But how could I cast a completely uninformed vote?

Some of the most contentious moments were left for last. Chairwoman Bonds was moving towards closing the meeting when a resident asked to address a community concern. Bonds noted that the community concerns portion of the meeting had been at the beginning but gave this T Street N.W. resident the opportunity to speak. And she then spoke perhaps more eloquently than anyone else that evening.

The resident was very concerned about an upstart business's application for a tavern license. Parking, noise, trash, extended operation hours, and higher crime were the stated concerns. Fair enough, but the residents would-be brief comments turned into a resolution for ANC 5C to back a challenge to the liquor license. The resolution obviously had not been on the agenda and the tavern owner had been given no notice of the impromptu resolution affecting his rights. I voted no on the challenge due to due process concerns.

Residents can and will challenge this liquor license and seek concessions. We ought to respect our businesses (there are too few) enough to give their owners the opportunity to present the other side. The resolution passed, but I believe that other commissioners were on board with me on this one.

Finally, our treasurer gave the latest estimated figures on ANC 5C's net worth: $15,572 in checking and $147,416 in savings. I hope we can trust Industrial Bank to stay afloat.
Posted by Kris Hammond at 1:09 AM 7 comments:

There was beer, there was roast pig, and eventually there was wild dancing. 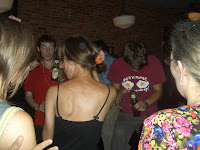 It all took place tonight at our very own Big Bear Cafe, celebrating its one-year anniversary of existence in Bloomingdale.

After achieving a zoning change in the near future, the next stop for Stu and Lana: a liquor license.
Posted by Kris Hammond at 9:45 PM 1 comment:

I write to inform you that I will not be seeking re-election this November to the position of Advisory Neighborhood Commissioner.

The decision to announce a run for office comes with the implicit promise to the voters that the candidate will strive to complete the full term to which he or she is elected. I could not in good faith make this promise because I am looking to transition to a new job within the year, either as a prosecutor or a counsel at a private firm. The new job, possibly requiring geographical relocation, would likely require a level of time and attention that would be incompatible with ANC duties.

Fortunately, there is a person who I am confident will keep the momentum going in the right direction by serving as your next ANC. That person is Ted McGinn. He understands that our area needs economic development that reflects our neighborhood’s character. He interacts well with people of all backgrounds and incomes. He is a clear communicator who is also incredibly well-informed. Ted’s track record of service to this community is impeccable. I have asked Ted to run for the office of Commissioner, and he has agreed to take on this latest challenge.

It has been an honor to serve as a Commissioner in the District of Columbia.

If you aren't on a neighborhood listserv and/or didn't receive one of the 500 flyers dropped this past weekend... I am holding a community walk-through with the D.C. police department this Thursday August 7 at 7 p.m. We'll meet at the corner of P Street N.W. and North Capitol Street N.W.

The purpose will be to raise awareness, promote community spirit, fight crime, and pinpoint problem properties, trash issues, and city maintenance matters. The plan is for half of us to walk north and half to walk south with foot beat police officers and D.C. government representatives.

The walk-through I hosted on May 30th was very successful. However, only one person living south of Florida Avenue showed up, so I want to focus this time on the area south of Florida.

Special thanks to the following individuals who each dropped at least 100 flyers each: Allison Gallaway, Gretchen Franke, and Ted McGinn.
Posted by Kris Hammond at 11:33 PM 282 comments: